My sister gave me a pair of Toms two Christmases ago and they’ve been well worn. All the social goodness aside I love Toms because they’re comfortable on my ever worsening bunions and don’t require a lot of fuss. I wore the white lace ones during the reception for our wedding and they glide across a dance floor like a dream. 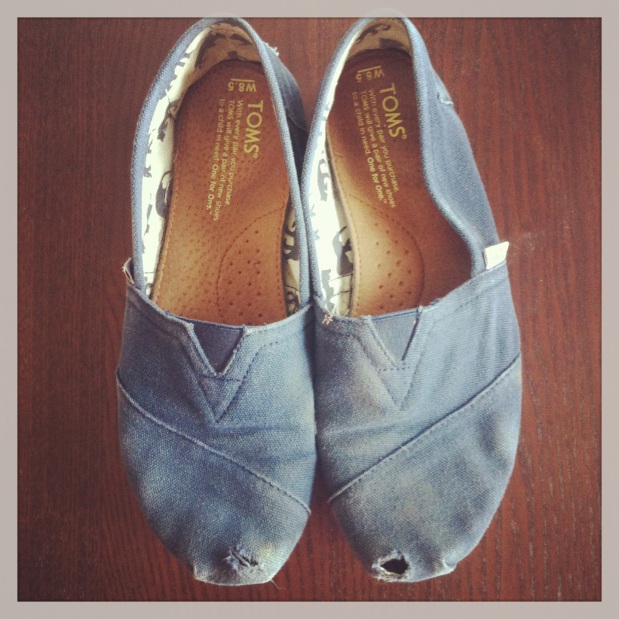 A couple of weeks ago I was at a dental CE day and across the parking lot from the conference center was a fabric store. I wandered in and while browsing some cute cotton duck fabric, remembered this awesome tutorial on how to repair your Toms. So here’s my cobbling experiment:

1. Wash and dry the front area where you’ll be patching. I scrubbed mine with a kitchen brush to knock off the dirt and let air dry.

2. Apply denim iron on patches per their instructions. As the previous tutorial states, you don’t want to put new holes in your repaired shoes. I found it easiest to fold a piece of paper and hold it against the patch from the inside so I wasn’t burning my hands. Rounded edges tend to stay down better and are easier to iron than squared ones. 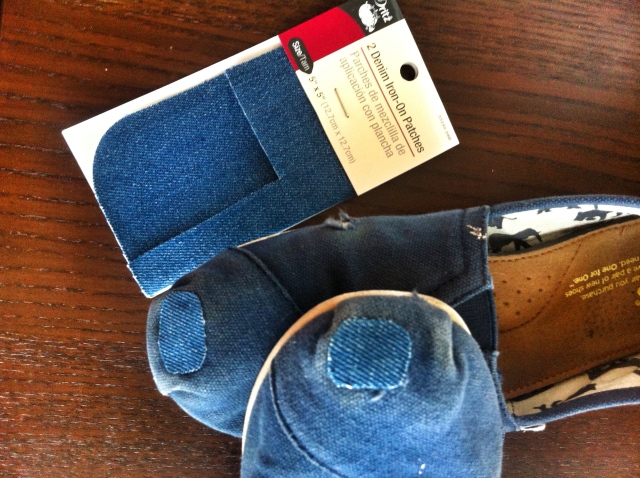 3. Spread fabric glue all over the front section and place the finished hem of some fabric against the diagonally finished line of the front section. I didn’t have any already hemmed fabric like the tutorial so I sewed two straightish lines to finish off my fabric. The raspberry thread made a nice, happy contrast. I found it easiest to pin the fabric here once I’d smoothed out the wrinkles to keep it in place.

4. Slowly trim around the bottom edge and tuck it in against the sole of the shoe. I placed extra glue to help hold it in place and a knitting needle made a great tucker. For the front I folded the fabric like the original shoe, added some more glue for good measure and pinned down.

5. Let dry according to the fabric glue’s directions (mine was 2-4 hours). 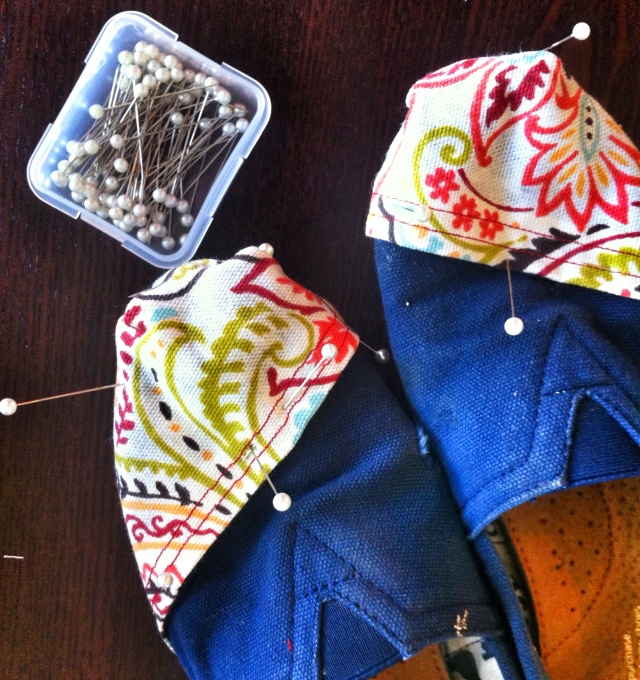 Welp, you can clearly see I needed to warm up on the sewing machine as the lines on the left one aren’t quite as straight as the ones on the right..

6. Wash the fabric glue off of everything you got it on.. which for me was a lot!

7. Go for a run and enjoy the beautiful spring while you wait.

Patched and ready for more adventures

I didn’t end up patched the little bunion hole on the left one, mostly because the inside fabric is holding up well. For now I’ll leave it be. They’re nothing fancy, but they’ll be perfect for jotting across the street for coffee or browsing the farmer’s market next weekend.

First, thanks to all the veterans for keeping our country safe and for the many sacrifices you and your families make. Special shout outs to Granddaddy (Army, WWII-Pacific), my Papaw (Navy, WWII-Europe), my father in law (Air Force, Vietnam) and my little brother (Marine, Afghanistan) and cousin (Marine). Love you all so much.

Since apparently Veteran’s Day is a three day weekend up here I decided to get a little crafty to cover one of the walls of our apartment. We signed the lease for this place sight unseen when we moved here last June and while it’s clean and in a great location, the interior layout leaves some room for desirability. Lots of weird angles, not my favorite color paint and lots of awkward large wall spaces.

To try and add some color to one of the largest walls in the living area I decided to make some “art” that paid homage to the increasingly hard question, “Where are you from?”. I grew up in Tennessee but spent the last nine years in North Carolina in school. Jeff grew up in Pittsburgh, but then spend seven years in North Carolina and the last two working up in New Jersey. Now we are here on the complete opposite coast. By the time we explain all this, the poor asker of the question has a glazed over look and way more information than he or she was looking for.

So here’s what I made: 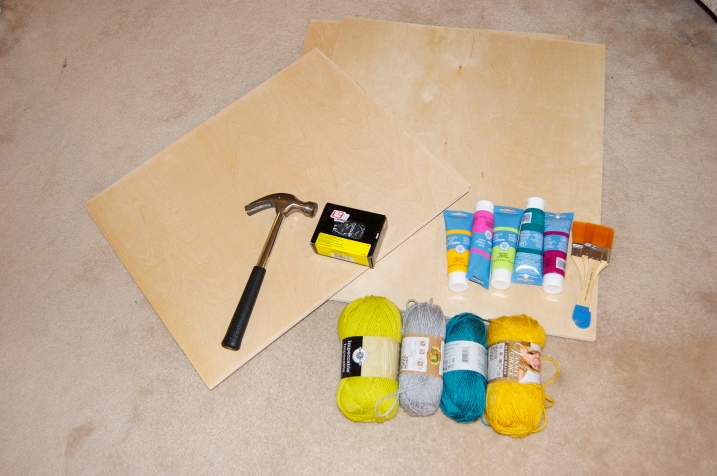 1. Start with large plywood boards (Lowe’s will cut them to size for you), acrylic paint (bought the cheapest that Michael’s sold), some yarn in contrasting colors and lots of nails (I used 1 1/4″).

2. Paint the boards. (Step 2b. Beg your husband to run out for newspaper because you’re tired of running around all day looking for the rest of the supplies and now remember why you don’t craft on a regular basis).

4. Start hammering (and try not to annoy your neighbors). You can nail directly into the board like I did, but that leaves some small paper tags at the end. You can also try and impress your outline with a dull blade if you want to be all fancy. Keep the nails fairly tight together, but don’t get lost in the details of recreating a coastline or river border. 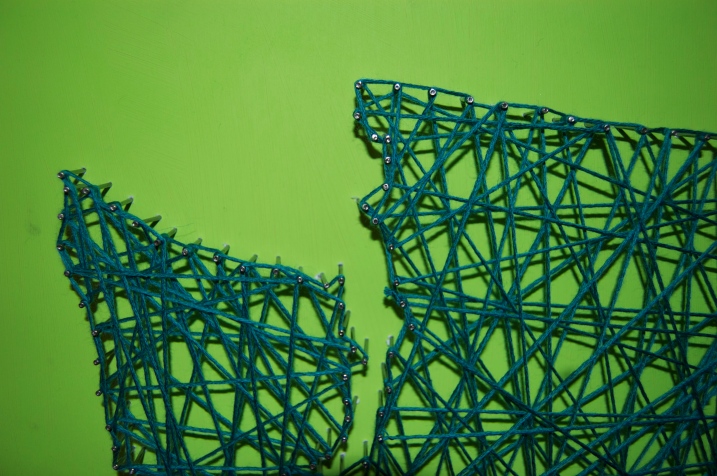 5. Rip off the paper (if it’s still there) and start stringing your yarn around all the nails. The more random you can be the better the outcome. Be sure to tie it off a few times so one slip off the nail won’t cause the entire piece to fall apart.

6. And repeat as many times as your neighbors will let you.

I secured them to the wall with some heavy duty 3M stickies (rated up to hold 9lbs! Love those engineers!). It’s not perfect (and Washington bothers me because it looks a little stubby – but I guess that’s just what the eastern edge looks like), but it’s a nice color pop on an otherwise bare and highly visible wall.

Jeff left on Thursday for our friends Erica and Sev’s wedding in Pittsburgh, so I was solo this weekend. On Friday we had a resident’s Fun Friday potluck cookout combined with a baby shower for our co-resident Christine. Kudos to her – I couldn’t imagine having a baby during residency; Jeff and I are trying out the whole “taking care of another living thing” on our recently purchased mint plant for the time being (speaking of.. should probably water that before he gets back…). Christine already has a lot of girly things to pass down to the new baby, so I decided to make the new little brother a more manly (but cute) baby blanket.

We finally gathered up the courage to go back into the chaotic black hole known as Ikea last Wednesday to purchase a table. We picked out one that folds up to a normal size during the week, but can turn into a monster surface for crafting – yay Swedish engineering! Okay, so the blanket isn’t very manly, but it had cute frogs and it’s really soft. I’m loving the minke fabric and the simplicity of this tutorial here that I found while reading this blog that I regularly follow. What did people do before the internet?

The baby shower/cookout was a success and I ate a ton of delicious food (which turns out will be one of the themes of the weekend, but more on that in a minute). 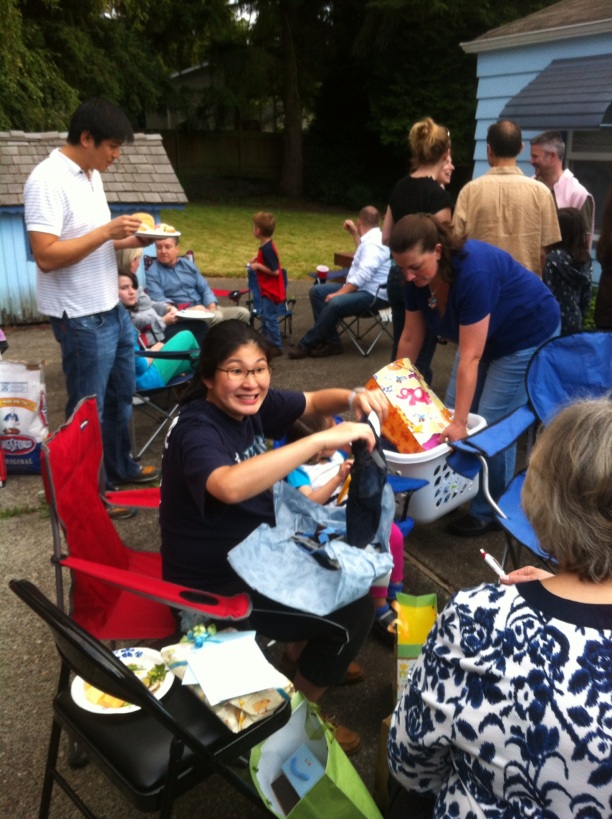 At the cookout some of the second year residents mentioned going to Bite of Seattle the next day and I decided to tag along. We only get like 4 weeks of summer here, so I’m determined to make the most of it. 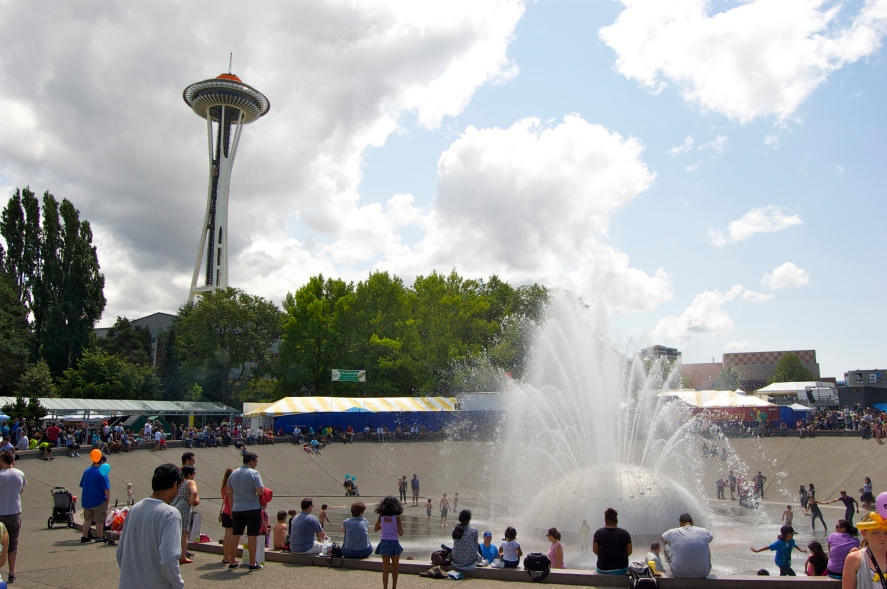 Bite of Seattle is basically a huge food festival and it was downtown at Seattle Center near the Space Needle. Food ranged from gourmet sampling bites from local restaurants:

“The Alley” menu featuring food from all these restaurants – for only $10!

The German bread pudding dumpling in garlic butter sauce at the top of the plate was my absolute favorite followed by the steak salad in a close second. 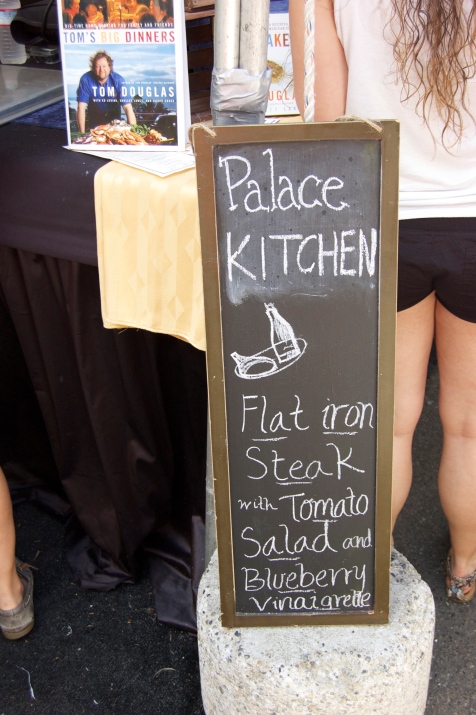 To the other extreme of delicious, greasy Fair food: 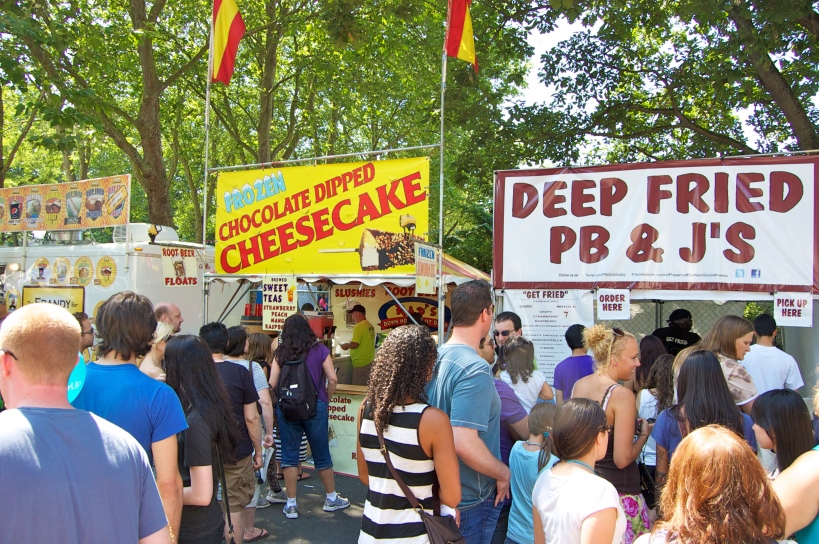 After indulging in some awesome food and enjoying several hours of sunshine with the second year residents I headed home and found that new large table with the sewing machine calling out my crafty side. I had seen some really pretty Liberty-esque fabric at the craft store when I had gone to purchase material to make Levi’s baby blanket and so feeling ambitious I went back. Also I thought Levi’s new big sister, the adorable Iris probably could use a blanket too so she doesn’t use her new little brother’s one.

I wanted a small bag I could put things in (toiletries, headphones, etc) when I went to the gym on campus but hadn’t quite gotten around to buying one yet. In my browsing of the internets I’d come across a few really good tutorials for cute ones, but since I’m inept (read: lazy) at the actual pinning of things on Pinterest, I’d lost them. Fortunately Google and I are good friends and I found a couple of great ones here and here, but ultimately ended up following this one since I wanted a zipper pull.  She laminated the lining fabric which I’ll do next time, but didn’t want to make a third trip to the fabric store this week.

I thought it turned out cute: 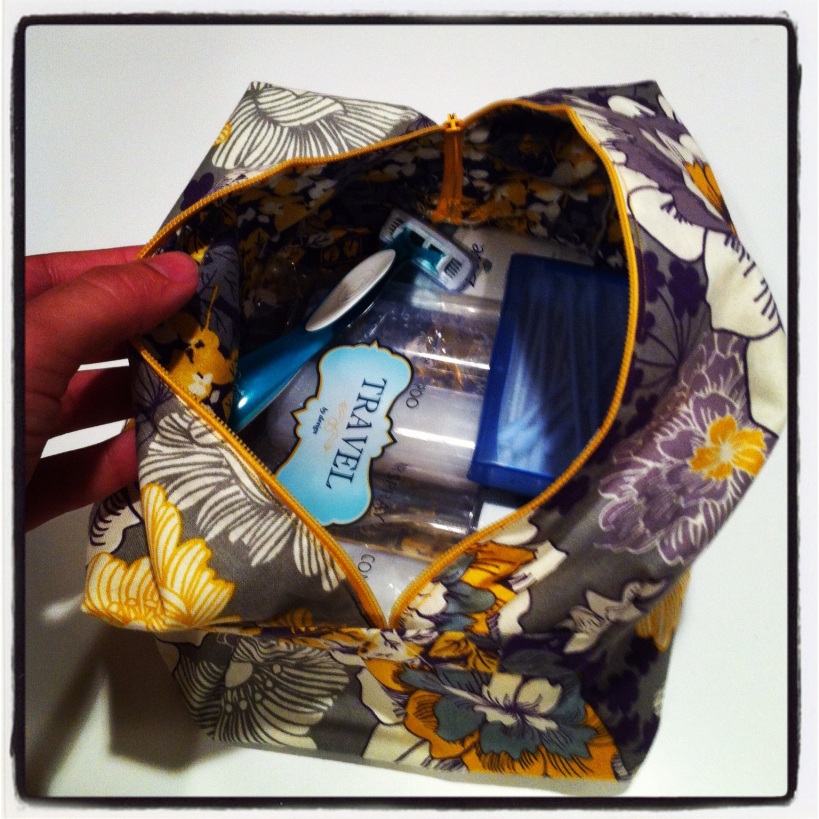 See what I mean about the fabric? Doesn’t it make you want to make something?? The inside is lined with a coordinating, more busy pattern. Also not to brag, but that bag has both a handle and a zipper pull. Oh yeah.

This was my second time putting a zipper into something and I must say it was easier than the first one (that was into a skirt and I didn’t know how to use the zipper foot at the time). Either I’m getting better or (more likely) just getting better at picking my projects. I need to get better at the actual sewing so I can make myself some bigger clothes after eating all this good Seattle food!

A round up of things I made this weekend (I couldn’t decide if Iris would like pink or purple better so I went for both): 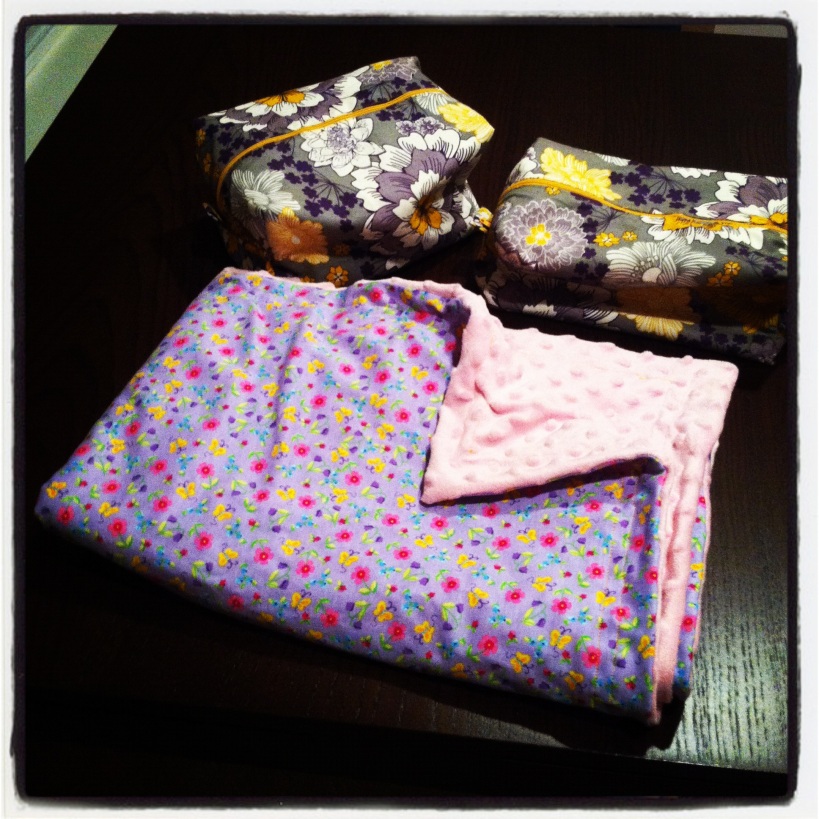 That second bag is going to my little sister taking the Tennessee Bar this week! Good luck Rachie!! 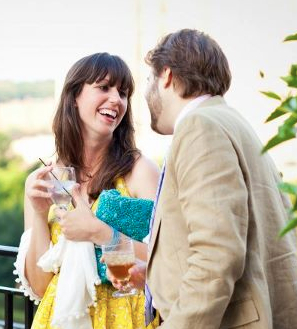